CPH traffic report: Eight out of ten travellers are back

With two million travellers, May became the busiest month since the pandemic struck. Now a busy summer beckons with extra traffic to southern European destinations. This puts additional pressure on airports across Europe. The advice is: Arrive on time and be extra patient.

Several new records were set in May. Sunday 29 May was the busiest day since the pandemic struck with 85,413 passengers on the last day of the public holiday long weekend. And overall, with 2,068,912 travellers, May was also the busiest month since Covid-19 sent aviation into free fall. This places the passenger figure at index 78 compared to the pre-Covid benchmark.

“With such a busy spring, we can see that Danes and southern Swedes have once again taken to the skies, so we’re now anticipating a really busy summer,” says Peter Krogsgaard, Chief Commercial Officer of Copenhagen Airport.

This summer travellers will have more than 125 destinations to choose from. The traditional southern European destinations are well represented in the airlines’ summer schedules for Copenhagen Airport. Spain is at the top, followed by Turkey, Italy, France and Greece.

“Especially the Greek islands and the Turquoise Coast of Turkey are growing in popularit. Measured by the number of airline seats available this summer, the two countries are at index 115 and 133 compared to pre-Covid times, says Peter Krogsgaard.

“As in the regional airports of Billund and Aalborg, we’re also seeing at CPH that Danes are travelling like never before. However, as an international airport, we still need all our foreign travellers and transfer passengers back to get from the current level of almost 80 to 100 per cent of the traffic before the pandemic,” says Krogsgaard.

It is mainly foreign travellers on the long-haul routes to Asia that are missing, while the numbers of routes and travellers to and from North America are growing – most recently with the Delta Airlines route to New York and the SAS route to Toronto.

Since January, passenger numbers on long-haul routes have increased from index 27.7 in January to index 59 in May compared to the figures in 2019.

Longer waiting times – also into the summer
The anticipated holiday rush is putting pressure on European airports, which are rebuilding their organisations after the pandemic and are busy hiring staff. This may mean longer waiting times and more delays across Europe than we normally experience during the summer months.

“Here at Copenhagen Airport, we expect our 330 new security staff to be fully trained and ready to get passengers off to a good start on their holidays when the summer season begins at the end of June,” says Krogsgaard.

In May, however, there were periods with long waiting times at security checkpoints, especially during the two public holiday long weekends in mid and late May.

“We’re very sorry about that. However, I can assure everyone that we’re working hard so we’ll all be ready for a normal busy summer with waiting times of 20–30 minutes. And as always, our best advice for the summer is to prepare thoroughly from home, to pack a little extra patience too and arrive on time – that is two hours before on flingts in Europe and three hours before on the long flights out of Europe,” explains Krogsgaard. 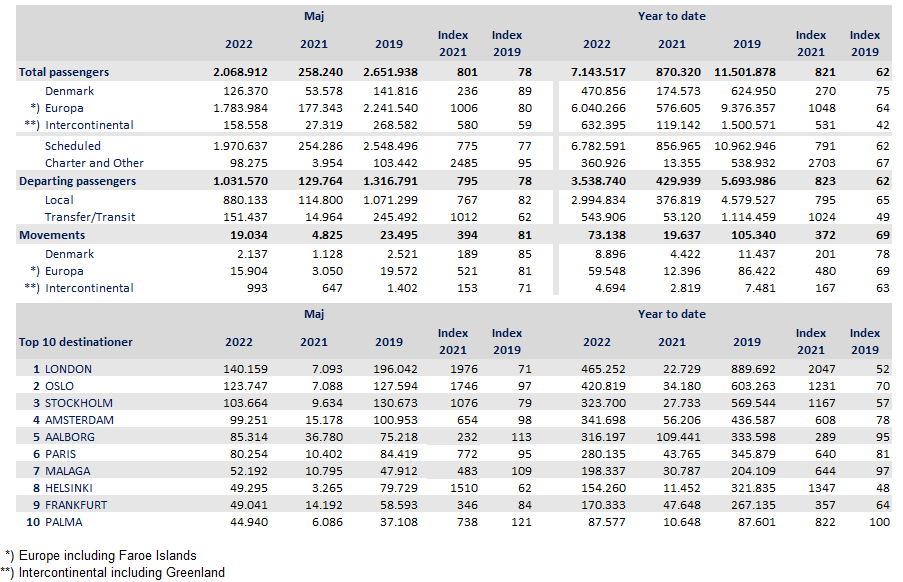