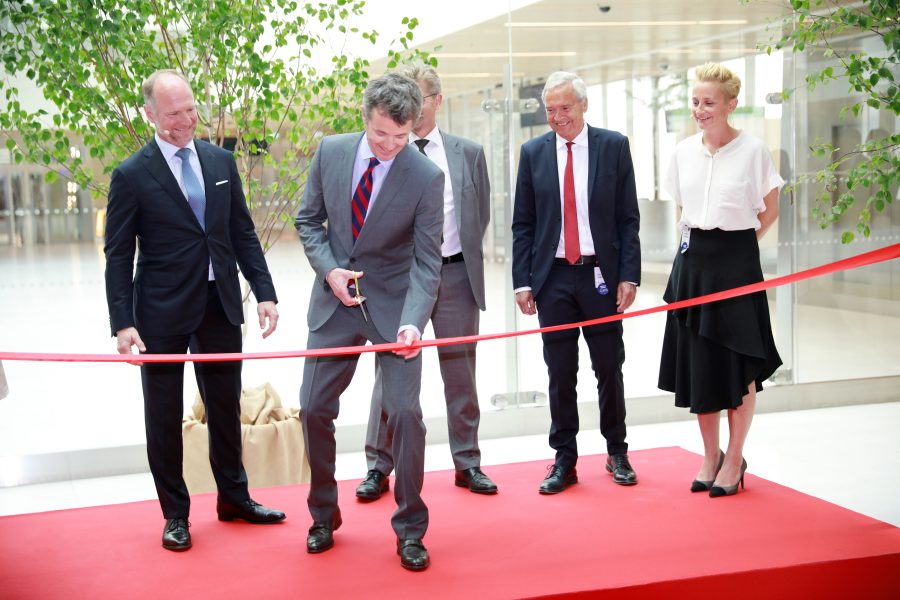 With 14.4 million travellers, the first six months of 2019 were just as busy as the record year of 2018. The construction of the airport of tomorrow also kept pace. In June, HRH the Crown Prince opened a new terminal area worth nearly DKK 2 billion. We have also been paying increased attention to what can be done to reduce the impact of the airport on the climate.

At the end of the first six months, the profit before tax excluding one-off items, was DKK 621.6 million. This is 12.5% lower than in the same period last year. There are several reasons for this, the main one being the reduction of the charge that airlines pay to use the airport.

Following a 10% reduction as of 1 April 2018, by 1 April 2019 it was reduced by a further 5%. In addition, there was increased depreciation and, also higher staff costs due to inflation and capacity expansion.

The first six months of the year was in line with the same period in the busy record year of 2018, with a total of 14,444,766 million travellers: 0.1% less. The number of locally-departing passengers fell by 0.7%, while the number of transfer and transit passengers increased by 1.5%.

The 2019 growth is also being driven by an increasing number of the long-haul routes from CPH, which showed an increase of 7.7% compared to the same period last year. However, the number of travellers on shorter routes within Europe fell by 0.8%.

“More routes, more transfer and not least the growth of long-haul traffic increase Denmark’s connectivity and strengthen Copenhagen Airport as a North European hub, in line with the objectives in the National Aviation Strategy. We look forward to continuing our close collaboration with authorities and partners to execute the strategy,” says Thomas Woldbye.

In Copenhagen Airport there are a number of reasons why the total number of travellers did not increase when compared to the record year of 2018.

“The SAS pilot strike in April and May impacted negatively with approximately 175,000 passengers. At the same time, Norwegian adjusted their traffic programme and therefore didn’t fly as many passengers as in the prior year. We are also seeing an impact from last year’s bankruptcy of Primera Air from May onwards. The company flew several charter flights to numerous summer destinations. That capacity is absent this year. So, the fact that we are in line with the record year of 2018 is an excellent result”, says Thomas Woldbye.

The lower charges mean that the revenue in the aeronautical part of the business fell by 7.0% to DKK 1,174.7 million.

In the non-aeronautical part of the business, such as the shopping centre, leasing and parking, revenue increased by 3.5% to DKK 925.0 million.

The first half of 2019 saw a large number of new routes, both summer routes and year-round routes, to new and existing destinations.

The new year-round routes are to European destinations such as Liverpool, London Southend, Nantes, Cracow and Düsseldorf.

Investing in the airport of tomorrow

Over the past decade, CPH has invested more than DKK 11 billion in developing the airport of tomorrow, to ensure that Denmark has the best possible accessibility to the rest of the world. In 2018, CPH increased the already high level of investment to DKK 2.1 billion.

The 4th of June saw the grand opening of the largest terminal built in decades – Pier E, an impressive 36,000 m2 with passenger areas, gates and a new passport control. The building was formally opened by HRH Crown Prince Frederik.

“As an airport, it is our societal task to ensure capacity for airlines so business travellers and tourists can visit Denmark, and we ourselves can travel the world. Pier E marks a milestone in our work of creating the airport of tomorrow. Globally, we are looking forward to a growth in the number of passengers, but not necessarily in the number of take offs and landings, given that the aircrafts are getting larger and the load factor is increasing”, says Thomas Woldbye.

The construction of the airport of tomorrow continues. A new sorter facility for departing luggage and a completely new space in front of the terminals are being constructed. In addition, preparatory work is under way for the largest construction project in recent times: an 80,000 m2 extension of the terminal area after the security check, with extra space for airport travellers, airlines and companies. The project also includes a significant extension of the baggage-reclaim area.

In the first six months of this year, capital investments amounted to DKK 1,083.1 million.

“The financial development in Copenhagen Airport with high investments, uncertain development in world economic outlook and passenger numbers and negative events for some airlines has put pressure on our cash flow. The timing in the investment program announced for the airport therefore might have to be reconsidered if this development accelerates,” says Thomas Woldbye.

As a temporary measure due to the pressure on the cashflow and the mentioned external uncertainties the Board of Directors has decided to pay out 50 percent in interim dividend as opposed to the policy of 100 percent. This is not a long-term sustainable solutionwill be reviewed at the year end. The Management and Board will follow the development closely.

Thomas Woldbye emphasizes that growth and the creation of the airport of the future must be sustainable for the climate as well as financially.

“The future growth must be accompanied by ambitious goals for climate and the environment. We reached our first target this year when the ACA (Airport Carbon Accreditation)-certified CPH as a CO2-neutral airport. This is the result of a large-scale climate project in the country of Laos, which will compensate for the CO2 emitted by the airport itself. Being a Co2 neutral airport is currently the highest level possible as part of the ACA scheme.”, says Thomas Woldbye.

The main criteria for choosing the project include the facts that: it is certified as a Gold Standard project; it is going on in one of the least developed countries in the world; and the type of project (climate-friendly cookers) features on the list of projects we believe to be highly credible cf. the aviation industry’s global climate certification ACA’s (Airport Carbon Accreditation) guidelines for climate compensation.

The airport is working to eliminate CO2 emissions by 2030, thereby continuously reducing the need for climate compensation.

Based on the 2019 traffic programme forecast, the total number of passengers is expected to be on a par with 2018. Consequently and due to the charges reduction noted above CPH has adapted the range related to revenue growth to a negative growth of 2-3% against a previously announced range with a negative growth of 0-1%.