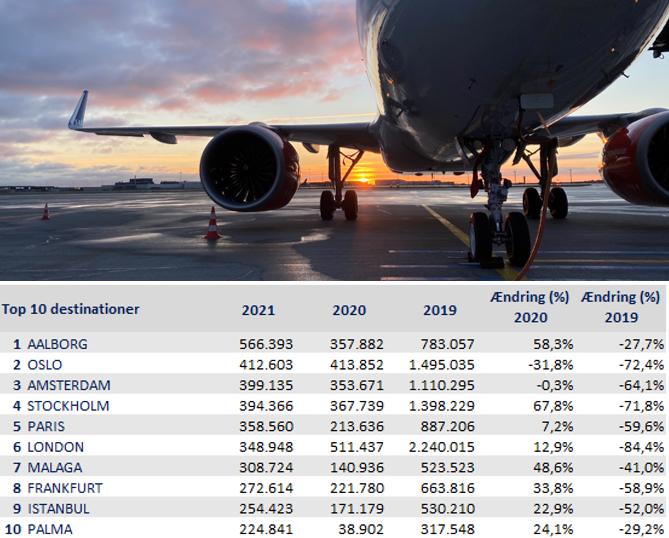 CPH traffic: Growth in summer and autumn promises a brighter outlook for 2022

Just under 9.2 million passengers passed through CPH during 2021, corresponding to about a third of the figure before the pandemic. The first half of the year was practically without activity and passengers on account of the infection rates and travel restrictions. During the summer and autumn, air travel staged a comeback, and passenger numbers in the second half reached over fifty per cent of the figures for 2019. We are seeing the first green shoots of a recovery in 2022.

2021 was very much a game of two halves. It started with parked aircraft, empty terminals and merely 5,000 daily passengers, corresponding to a standard day of travel in 1962.

“Following an incredibly quiet winter and spring, Europe re-opened when the travel restrictions were lifted. Passenger numbers more than quadrupled in just a few months, from 260,000 passengers in May to 1.2 million in July. This shows that the appetite for travel is intact and makes for a promising outlook for 2022,” says Peter Krogsgaard, Chief Commercial Officer of Copenhagen Airports A/S.

The summer and autumn brought back life to the terminals with some 40–50,000 daily passengers and the re-opening of around 120 destinations. During the second half, the activity reached fifty per cent of the figures pre-Covid, carried in the main by European traffic.

“Despite the Omicron variant, we had just under 1.1 million passengers in December – a fine end to a year in which particularly the summer and the schools’ autumn break unleashed the pent-up demand for travelling the world for business and leisure,” says Krogsgaard.

CPH is an attractive destination for the airlines
The majority of the international routes were restored during the course of the year, and CPH remains the largest and most important international airport in the Nordics.

Krogsgaard emphasises that airlines regard CPH as an attractive and efficient airport with a large catchment area, covering not just Denmark and southern Sweden but also large parts of northern Europe:

“All the airlines that operated out of Copenhagen before the pandemic are still at CPH. This is crucial for us in re-establishing the strong network of routes and securing CPH as the most important international traffic hub of the Nordics,” he explains.

Spain was the top scorer of 2021
In 2021, the monthly top-ten lists of destinations featured particularly one country: Spain. Málaga and Mallorca were the favourite destinations until they were replaced by Gran Canaria in December.

Thus, Spain was the hands-down most popular country with 1.1 million passengers travelling from CPH.  Other classic holiday destinations were also in great demand, such as Italy, Greece and Turkey with 450,000, 410,000 and just under 370,000 passengers respectively.

As domestic traffic was far less affected than international travel, Aalborg became the largest destination of the year with 566,393 passengers.

For many years, London was by far the largest destination out of Copenhagen with more than twenty flights daily. Not anymore. In the top-ten destinations for 2021, London comes in much lower as number 6 with 348,948 passengers – a drop of 84.4 per cent compared to the most recent normal year pre-Covid.

Even long-haul routes show signs of recovery
While most European countries re-opened around the beginning of the summer holidays, the United States and Asia remained more or less closed to foreign travellers till November. This meant that passenger numbers on the intercontinental long-haul routes for 2021 finished on just under 18 per cent of the figures from 2019:

“Towards the end of the year, long-haul routes out of Europe to particularly Thailand and US destinations like New York, San Francisco and Chicago began to recover in earnest. In December, we reached almost fifty per cent of the normal passenger figures for intercontinental travel. This is surely cause for even greater optimism!” says Krogsgaard.

In his view, we will need simpler and clearer travel rules in 2022 – not just in Europe but worldwide. It will be in the interest of the vast majority of countries:

“Once we get through this winter – and provided we avoid any further surprises in the form of new Covid-19 variants – we stand every chance of seeing air travel in Europe nearing normal levels during the summer,” concludes Krogsgaard. 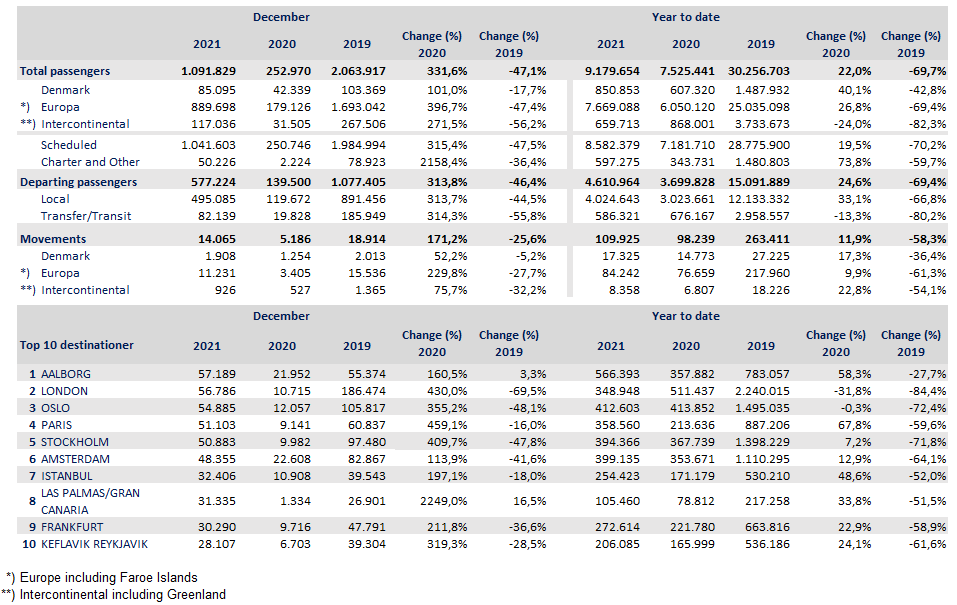