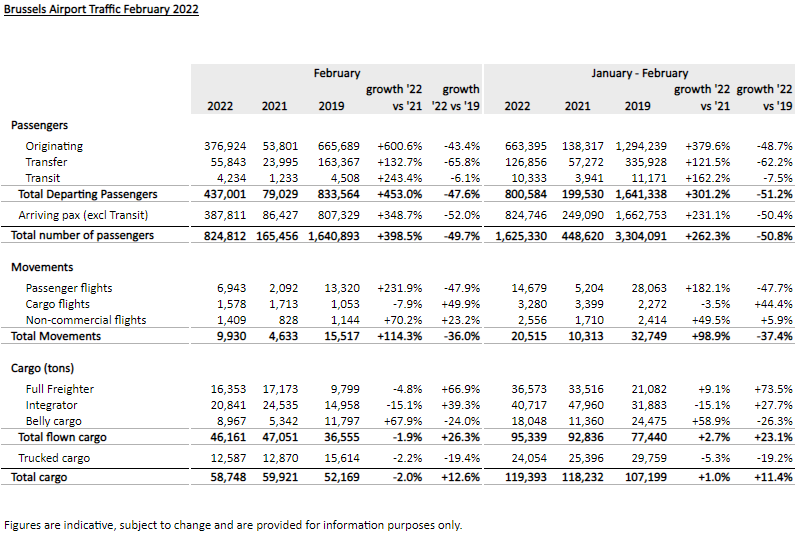 This last February, Brussels Airport welcomed around 825,000 passengers, up by 400% compared to February 2021, but still down by 50% compared to the same period before the crisis (February 2019). A better month than January (-52%), despite being shorter by 3 days. In terms of freight, the volumes transported increased by 13% compared with February 2019, thanks to the significant growth in air cargo (+26%).

In February, Brussels Airport welcomed 824,812 passengers, an increase of 398% compared with February 2021 (ban on non-essential travel) and a decrease of 50% compared with the same period before the crisis (January 2019). Despite the fact that February only has 28 days, it was a better month than the previous one, during which Brussels Airport counted a little over 800,000 passengers. February also welcomed more departing than arriving passengers due to the start of the Belgian carnival holidays.

The proportion of departing transfer passengers was 14%, which is 6% lower than in 2019, due to the stronger growth of local departing passengers and a reduction in transfers between European destinations.

Freight: air freight volumes up by 26% compared with 2019

In February, the freight volume at Brussels Airport grew by 13% compared with February 2019, before the crisis. This result can be explained by the strong increase in air cargo volumes (+26%). Thus, the full cargo (+67%) and express services (+39%) segments remain the growth drivers, while passenger volumes remain understandably below 2019 volumes (-24%).

Compared with 2021, the full cargo segment recorded a slight decrease in volumes (-5%) due to temporary capacity constraints faced by some carriers. The downturn in freight caused by the Chinese New Year influenced freight volumes at the beginning of the month, in line with historical trends. Last year was an exception, however, as production was exceptionally strong in Asia due to the significant delay caused by transport restrictions. Express service volumes finished the month down (-15%) due to a reduction in DHL Express flights at Brussels Airport since the beginning of the year.

Asia remains the largest export region, but is only the third largest in terms of imports due to the effect of the Chinese New Year. As a result, Africa has become the largest import region in February, followed by North America.

This last February, the number of cargo flights fell by 8% compared with 2021. Cargo flights on passenger aircraft accounted for 38% of full cargo flights, which is consistent with last month.