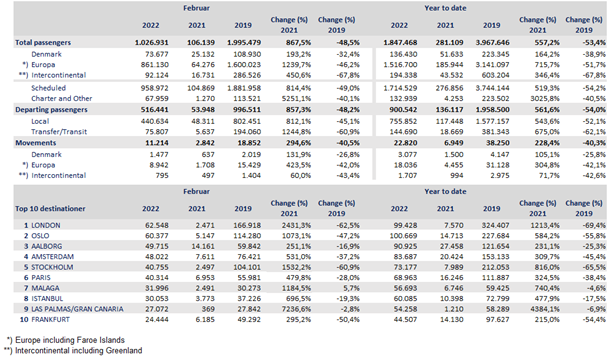 With one million travellers, February was a busy month at Copenhagen Airport. More than half of the pre-pandemic traffic volume has now been recovered. Although Russia’s invasion of Ukraine is spurring renewed uncertainty, CPH expects both the spring and summer seasons to be busy and is now hiring several hundred new employees.

With 1,026,931 travellers in February, the traffic volume at Copenhagen Airport reached 51.5 per cent of the figure in the same month of 2019, the last year of pre-pandemic normality.

“The entire travel industry is on the right track. Up until Russia’s invasion of Ukraine on 24 February, there were signs as well as a general sense that travellers, airlines and all the businesses here at the airport had regained their confidence in the future. But the horrible war has clearly spurred renewed uncertainty,” says Chief Commercial Officer Peter Krogsgaard of Copenhagen Airports.

In terms of air traffic flows, only long-haul traffic from northern Europe to Asia is directly affected by the closure of Russian and Ukrainian air space. Before the pandemic, flights to Asia accounted for about 4 per cent of total traffic at CPH.

“In times of war and instability, American and Asian travellers are typically more reluctant to go to Europe. Inter-European traffic is not affected,” he says.

Traffic data for February show that the number of passengers carried on European routes reached 53.8 per cent of the normal volume, while long intercontinental routes are still at a mere 32.2 per cent of pre-pandemic levels.

“The question is what effect the war will have on people’s personal finances and desire to travel – and what effect the war will have on businesses and the airlines with the current surge in energy and fuel prices. Like with the COVID-19 pandemic, it is extremely difficult to forecast anything about the future. However, we still believe that we will have a very busy Easter and summer season with increased traffic volumes in Europe, not least to Mediterranean destinations,” says Peter Krogsgaard.

With the prospects of increased activity, more hands are needed at the airport. When the crisis hit in March 2020, roughly 22,000 people were employed by the some 1,000 businesses operating in and around the airport.

In March 2021, this number had already dropped to just under 13,000, but now the tide is beginning to turn. Today, the number is about 14,000, and most businesses are hiring.

This also applies to Copenhagen Airports A/S, which expects to hire up to 400 new employees in 2022.

“We need more hands in Security, for our operating activities and for a number of specialist functions. In addition, we are seeking to fill a number of new positions focused on the green transition, digitalisation of passenger journeys and upgrading of our entire IT landscape,” explains Krogsgaard.

CPH has just launched a major recruitment campaign in the media and will host a large job fair at the airport on 31 March in collaboration with the Municipality of Tårnby and the City of Copenhagen as well as several of the airlines and businesses operating at the airport, including the ground handlers responsible for check-in, boarding and handling of baggage and aircraft on behalf of the airlines.

“The fact that more hands are needed is good news. It tells us that the crisis in the travel industry is beginning to ease and that, despite the war and the pandemic, there is every reason to have confidence in the future,” concludes Krogsgaard.