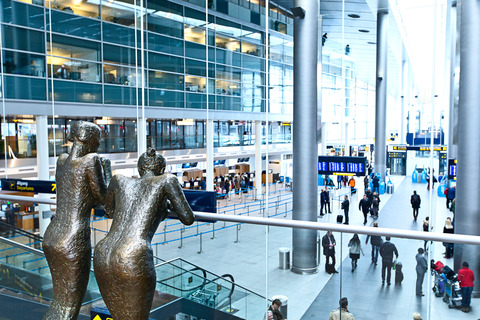 Travellers flocked through the airport terminals in April. At 1.8 million passengers, the Easter month became the busiest month at Copenhagen Airport since the pandemic hit two years ago. However, there is still some way to go before traffic is restored to pre-pandemic levels.

Air travel is on the road to recovery, and the effect is really noticeable at Copenhagen Airport. During the month of April, which included a busy Easter week, seven out of ten passengers were back compared to pre-pandemic levels.

“It’s great to see that people have an appetite for travel again – and are in fact able to get away. It felt quite hectic during the Easter holidays with very high passenger numbers. The airport, the shops and our eateries are again drawing in lots of customers,” says Chief Commercial Officer Peter Krogsgaard of Copenhagen Airports A/S.

The number of seats filled on the aircraft tells the same story, as the load factor rose from less than 50 to 70 per cent in the first four months of the year.

Busy training new staff
The growing number of travellers in and around the Easter week also meant periods of longer waiting times at security. The main reason was a lack of staff, as it takes several months to train newcomers, and the vetting procedures imposed by various authorities are lengthy.

“A lot of travellers from Denmark and southern Sweden experienced a very busy airport during the Easter period. It was challenging for us at times, but we were able to handle it.  We did our best to keep passengers informed about the risk of longer waiting times, and fortunately most of them by far made sure to be at the airport well ahead of their departure times,” explains Krogsgaard.

“We’re in full swing training our many new staff members, and very soon we’ll be fully staffed and ready for the summer season,” he says.

Traffic still well short of pre-COVID levels
Although the number of travellers at the airport has more than doubled – from 820,000 to 1.8 million – in the first four months of the year, there is still a way to go before numbers are back to pre-pandemic levels.

Just over five million passengers passed through the terminals at Copenhagen Airports (CPH) from January to April, which was 43 per cent fewer than in the same period of 2019. This means that CPH is still under financial pressure in spite of the improvements seen in recent months.

Since the crisis hit in March 2020, CPH has had to borrow more than DKK 2 billion to keep the airport running.

London firmly back as the top destination
The April traffic data shows that air travel in Europe particularly has staged a comeback. More than seven out of ten passengers are back on these destinations compared to pre-pandemic levels. Four out of ten are back on the long-haul intercontinental routes to Asia and North America.

For the third straight month, London tops the Top-10 list of destinations, and the British capital has truly regained the position as the busiest destination out of Copenhagen.

Country-wise, Spain is still the largest destination with some 300,000 travellers in and out of Copenhagen so far this year. Màlaga is seventh on the Top-10 list while Barcelona is ninth, followed by Gran Canaria, Alicante and Madrid.

“Judging by the steadily rising numbers of passengers since January, it promises to be a busy summer at CPH, and we expect European traffic to approach normal levels. Despite the war in Ukraine and the pandemic, it would seem that a lot of people are seizing the opportunity to see the world,” says Krogsgaard.