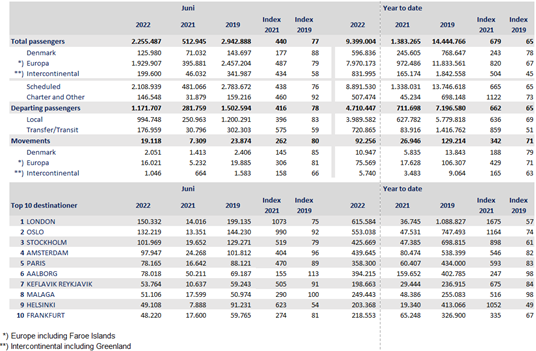 The first summer month of the year witnessed excellent passenger figures: 2.2 million passengers passed through the airport terminals in June.

No less than 2,255,487 passengers travelled to and out of CPH in June. This is the highest number of travellers since the pandemic hit. Almost eight out of ten passengers are now back. Sunday 19 June was the busiest day of the year so far at Copenhagen Airport with 86,922 passengers.

Greece was the absolute favourite among the charter destinations. As many as 41,070 travellers went on charter trips from CPH to Greece in June. This represents an increase of 16.6 per cent compared to 2019 when the corresponding figure was 35,224 travellers.

The rapid growth in intra-European travel has created quite a few challenges for some airlines and several European airports. During some periods this spring, staff shortages caused longer-than-expected waiting times at security at Copenhagen Airport. This issue has now been resolved and Copenhagen Airport is ready for a busy summer.

However, even though the appetite for travel has reached new heights, the current SAS strike will affect some travellers at Copenhagen Airport this summer. The strike broke out on 4 July and is affecting a number of passengers who should have been flying with SAS to and out of CPH.

“We’re sorry that many SAS passengers are inconvenienced by the strike. We obviously hope that the dispute will be settled before long. SAS is the largest airline at Copenhagen Airport, but may I stress that we’re fully operational despite the strike. The vast majority of travellers are departing as planned,” says Chief Commercial Officer Peter Krogsgaard of Copenhagen Airports A/S.