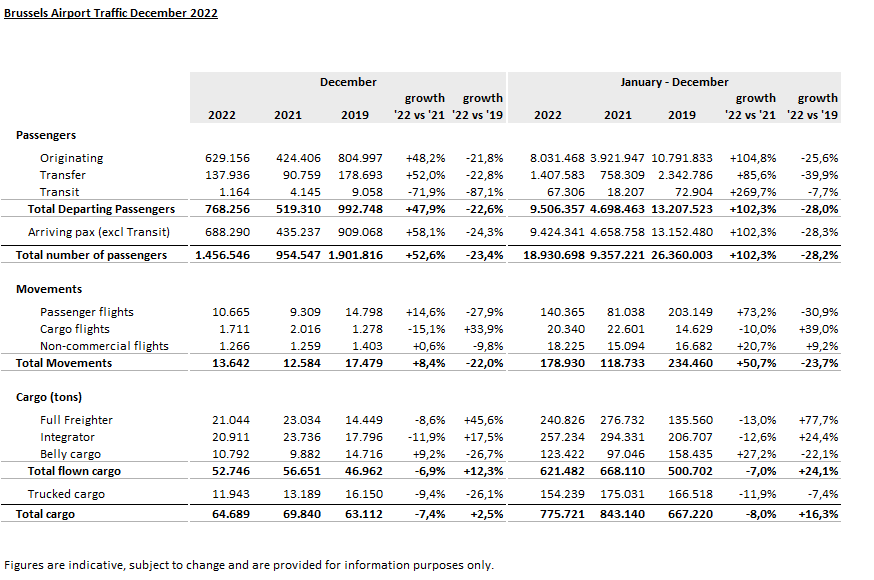 Passenger traffic in 2022 was up 102% on 2021 with almost 19 million passengers travelling through Brussels Airport or 72% of pre-crisis numbers. Following a first half-year impacted by Covid travel restrictions, passenger numbers showed a strong recovery in the second half-year with several months exceeding 80% of the 2019 figures. By contrast, after a record year in 2021 (+30%), cargo traffic saw an 8% drop in its volumes in 2022, with a total of 776,000 tonnes carried.

“After two complicated years, marked by the Covid crisis and the travel restrictions it entailed, Brussels Airport posted very strong growth in 2022. We are proud to have been able to manage this growth by offering a high-quality service to our passengers, who rediscovered the joys of travelling, whether for their holidays, family reunions or business trips,” explains Arnaud Feist, CEO Brussels Airport. “Since last summer, our network has been almost completely rebuilt and for several months we attained 80% of the 2019 passenger figures. The year 2023 looks promising with new destinations and increased frequencies for both short and long-haul flights. Brussels Airport’s cargo area has also done well this year after a record-breaking 2021.”

After a first half of the year still heavily impacted by Covid-related travel restrictions, holiday traffic, as well as travel to visit friends and relatives, picked up during the summer months to reach over 80% of pre-Covid traffic from July to October. From the autumn onwards, a tangible upturn in business travel was also observed, as well as a growth in the number of connecting passengers at Brussels Airport, marking a significant recovery in the hub activity linked to Brussels Airlines and its Star Alliance partners.

Traffic levels were negatively impacted by the three nationwide protests (in June, November and December), resulting in an estimated loss of nearly 100,000 passengers over the year.

The share of outbound transfer passengers was 15% compared to 18% in 2019, the recovery being particularly marked during the second half of the year.

The top ten most visited countries in 2022 were Spain, Italy, Germany, Turkey, Portugal, the USA, France, Greece, the UK and Morocco. Turkey, Greece and Morocco even surpassed the record 2019 results.

December saw 1.457 million passengers, 77% of the number recorded in 2019. After hitting over 80% of the 2019 figures for four consecutive months, the months of November and December traditionally attract fewer holidaymakers. As was the case for the nationwide protests on 9 November, the national industrial action day on 16 December also had a negative impact of around 30,000 passengers. The start of the Christmas holidays also meant that there were more departing passengers than arriving passengers during the month.

In the full freighter segment, we also saw a 13% downturn compared to the same period in 2021 but a 78% increase compared to 2019. Belly cargo on the other hand increased by 27% compared to 2021 (but remains down by 22% on the 2019 figures), due to the continued increase in the number of passenger flights. Finally, the integrator segment fell by 13% compared to 2021, but was still 24% up compared to 2019. In general, cargo volumes were under pressure all year round due to ongoing geopolitical tensions, lockdowns in China, the threat of a recession and its impact on e-commerce.