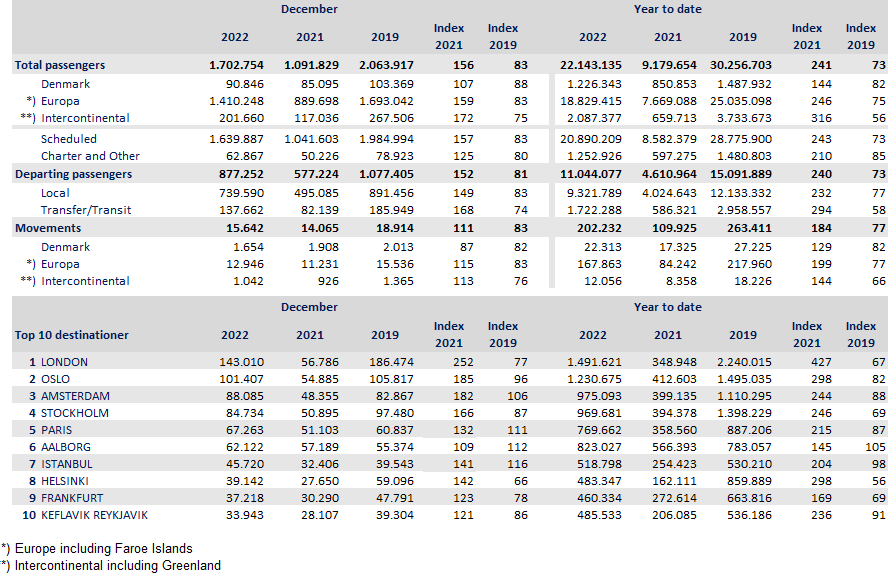 CPH: 22.1 million passengers passed through the airport in 2022

With 22.1 million passengers and 160 destinations on the route map, years of dramatic decline came to an end, and 2022 became a turning point for Copenhagen Airport. One in ten passengers travelled to Spain, which was the most popular destination of the year. On the long-haul routes, the United States made a real comeback with almost 800,000 travellers.

The year ended on a high and a clear upward trend for CPH with 1.7 million passengers in December, and more than eight out of ten travellers are now back compared to the last normal year pre-Covid.

“Once again, the terminals echo with the hustle and bustle of expectation – not least near the gates of departures to European destinations. The winter months are traditionally less busy, but we expect a spring and a summer with even more passengers than in 2022,” says Peter Krogsgaard, Chief Commercial Officer of Copenhagen Airports A/S.

The route network has been restored
The airlines at CPH are once again fully operational, with 59 different airlines flying on 315 routes to 160 destinations throughout the year.

“We’ve collaborated closely with the airlines to restart air traffic, and today all the major European routes are back in service, although generally with slightly fewer departures,” says Krogsgaard.

Several new airlines started operating out of CPH in 2022, including the Icelandic company Nice Air, the Greek airline Sky Express and Montenegro Air.

The United States made a real comeback
While domestic and European routes are approaching pre-pandemic levels with indices of 88 and 83, long-haul intercontinental routes are still lagging behind slightly, but they are making progress. In December, the index for intercontinental traffic stood at 75, in contrast to the winter months when it was around 22–24.

“On the long-haul routes, we note that the United States in particular is back in earnest and all routes have reopened. The United States came in at number ten on the list of the most popular destinations with just under 800,000 passengers – both American tourists and business people coming to Copenhagen and travellers from Denmark and southern Sweden going on one of the eight direct routes we offer to North America,” Krogsgaard explains.

Now just Asia is missing. Due to Russia’s invasion of Ukraine and the closure of the airspace, many air routes to Asia have become longer and more expensive. One of the consequences is that the route to Tokyo has been put on hold temporarily. Add to this, the current Covid-19 situation in China.

“Spain has everything: large cities, culture, beaches, and even in winter, there is sunshine and warm weather in the south of Spain and the Canary Islands. There were 2.2 million passengers on the Spanish routes last year – that’s one in ten passengers, which is really quite impressive,” Krogsgaard explains.

Brighter times ahead
The excellent finish to 2022 also heralds the end of the bleakest period in aviation history. In spring 2020, CPH went from serving 83,000 travellers on an average day to just 424 on 9 April 2020. It took until the summer of 2021 before things began to improve with the introduction of the Covid Status Certificate and the definite signs that the world was slowly reopening.

“As the figures show, the lifting of the travel restrictions in spring 2022 really unleashed our appetite for travel. Now we’re hit again by global uncertainty and inflation, but so far our need and wish to fly out into the world on holiday and business remains unaffected. That’s why we’re expecting a busy 2023,” says Krogsgaard.